Details of the explosion in Kiev and the attack on the monument. Five things you might oversleep 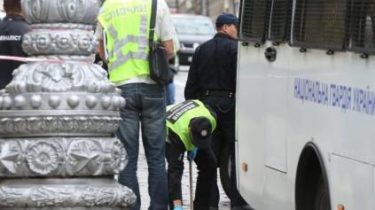 1. The journalists, who worked near the scene of the explosion on the street Grushevskogo in the afternoon of August 24, seized the footage to find and identify criminals who could get to the footage. This was stated by the head of the National police of Ukraine Sergey Knyazev. Read more →

2. On their own journalists, there is no threat to the lives of the victims in the explosion in Kiev. “Injuries received by two people – a man and a woman. Subsequently, from the hospital we received another message about the hospitalization of one woman. Read more →

3. In the explosion on Hrushevskoho affected the whole family, which came in the thanksgiving day parade in Kiev. The incident took place, albeit with blood, but without panic. Soon the street became a road again, and police said that there is nothing to fear. Read more →

4. Unknown poured paint over a monument to the heroes of the ATO, in Kiev, at the intersection of Prospekt Lesya Kurbasa, and the street Academician Korolev. The day on August 24 the monument has been cleaned. Read more →