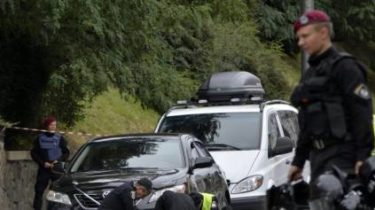 The explosion during the celebration of the 26th anniversary of independence of Ukraine on Hrushevskoho street 51-year-old mother-in-law of Hero of Ukraine, paratrooper-sniper Valeria Chemineau, continues to be in the intensive care unit of the Kyiv clinical hospital number 17.

As informs television channel “Straight” woman with a shrapnel wound to the head remains in serious but stable condition.

Also in the hospital was hospitalized a family friend, a former colleague of the Hero who received a shrapnel wound in the stomach, now doctors described his condition as moderate.

In addition, it is reported that recently, the hospital came a group of police, which continues here to be on duty. According to unofficial information, they will guard the house of the victims.

It is unknown what exploded – grenade or an improvised explosive device.

We will remind, on August 24 around 14:00 PM in Kiev on the Grushevsky street explosion, in which three people were injured. The police opened criminal proceedings under article about attempt at a premeditated murder committed by a method dangerous to the lives of many individuals. Before press-the Secretary of SBU Elena Gitlyanskaya said that the main version of the explosion on the Grushevsky street is disorderly conduct. In turn, the NSDC Secretary Oleksandr Turchynov did not rule out that the crime in Kiev could be a planned attack.

The journalists, who worked near the scene of the explosion, seized footage to find and identify criminalswho could get to the footage.