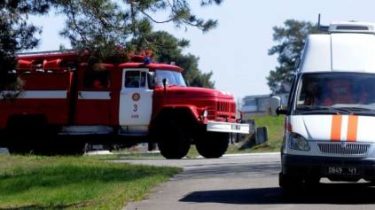 In a zone of carrying out anti-terrorist operation two women were blown up by an explosive device near the checkpoint APU.

It is stated in the report SMM OSCE.

“The medical staff of the hospital under the control of the government of the settlement Volnovaha (53 km South of Donetsk) reported that two women – 60 years old from Donetsk and 56 years of controlled “DNR”. Khartsyzsk (26 km East of Donetsk) was injured by an explosive device near a checkpoint of the Ukrainian Armed forces to the North from government-controlled villages. Birch (31 km North-West of Donetsk)”, – stated in the message.

A day in the ATO area, three soldiers were wounded, the Ministry of defense

According to the medical staff, the woman went to government-controlled areas on the bus and went into the forest near the checkpoint, where 56-year-old woman touched the explosive device, the explosion of which she received shrapnel wounds to the legs, torso, arms and head.

They reported that a second woman at that time was at a distance of about 20 m from the explosion and received shrapnel wounds of the left Shin.

Medics reported that the military had women first aid at the scene and then the ambulance took them to hospital. The staff also noted that the status of both women is satisfactory.

We will remind, the Special observers monitoring mission (SMM) of the OSCE in Ukraine as of 13 August from the beginning of 2017 recorded in the zone of the Antiterrorist operation 350 casualties among the civilian population, 65 civilians were killed.