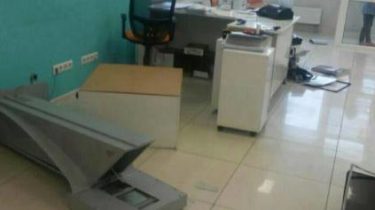 The offices of the enterprise “Kievenergo” has passed in a mode of operation in a state of siege after several attacks in a row of the same men. The company has strengthened protection, because he believes that the striker could return at any moment, says the story TSN.19:30.

Now at the entrance to the Obolonsky branch “Kyivenergo” face control works – security let people selectively. The office has survived the attack of a man who went inside and began to destroy equipment. He destroyed a few plasma TVs and was going to beat Windows, but he was stopped. To comment on the incident staff banned all the questions I ask to address in a press-service.

One and the same person for three days caused damage to the customer service centers in three different locations. To the office in the street of Williams, he came in his own car, started with smashed Windows, and then smashed the office equipment and furniture. According to eyewitnesses, the assailant he called himself an ambulance, but subsequently returned, and then the police took it. “He says I don’t have enough, I drum, I did not” – say witnesses to the events. Povitroflotskyi Avenue, the same man smashed stones at the window, but the room hasn’t come. “One, beat before breaking the glass, and then calmly walked away” – describe the attack of the unknown by those who saw her.