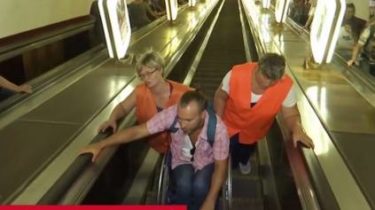 From Kiev with disabilities Dmitry Webutuck traveled all over Ukraine by hitchhiking and regularly used public transport in the capital, until he came to a forced “service” in the metro. He called it similar to a public rape and complained on social networks, says the story TSN.19:30.

This message is gathered over a thousand likes on Facebook and provoked a debate that has been simmering for several days. Dmitry says that the rules to guide a person in a wheelchair in the subway have three specially trained workers, but he asks not to do it because everyone can. At the same time came across failure and was forced to wait at the turnstile for about 20 minutes, though was in a hurry. “I won’t let you! And with a smile! If it were a child!”, he said.

Subsequently, he said, came the assistant who took him on a separate escalator, although he is able to move normal. “People in wheelchairs, if they have the opportunity to travel, give them this opportunity! Do not make them limited people” – asks the guy at the end of the day.

In the metro explain that he had acted according to the rules of use of the escalator, which, they say, as traffic rules are written in blood. “You do not have the rights of wheelchair users without assistance to use the escalator, because there is safety as the passenger in a wheelchair and other people who go near the escalator”, – says press Secretary of the Moscow subway Natalia Makogon. Conflict, it explains the human factor – say, people don’t agree with the sentiment in a specific day.