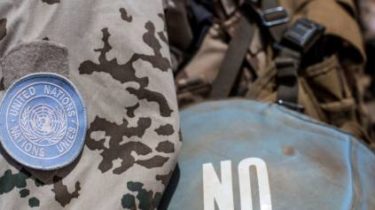 The conduct of UN peacekeepers in the conflict zone in the Donbass Russia blocks.

This was stated on air of Radio Freedom, the first Deputy Minister of foreign Affairs of Ukraine, head of mission of Ukraine to NATO Vadim pristayko.

In his opinion, the Ukrainian government is considering various additional mechanisms to end the war in the Donbass. “If the Minsk agreement for three years did not lead to peace, then perhaps there are some additional mechanisms that we need to take, as the Ukrainian government, to ensure peace for our people. That is why we are talking about a peacekeeping force to any format… Discussed the option of arming of the OSCE mission (current or new) with light weapons, so they felt more confident and was able to visit those places which must visit. Another option is providing (Donbass – ed) by UN peacekeepers. Of course, we know who’s blocking it – the same Russia that stands behind the fighters,” said Pristayko.

We will remind, the Russian foreign Ministry commented on the possibility of the entry of UN peacekeepers to the Donbass. The Minister of foreign Affairs of Russia Sergey Lavrov said that the introduction of the UN peacekeeping mission in the Donbas is not foreseen in the Minsk agreements, this requires the consent of the Russian fighters.

“In Minsk agreements about the peacekeepers not go”, – he said after talks with OSCE Secretary General Lamberto Zannier.

According to Lavrov, “in the Minsk agreements supported the role of the special monitoring mission of the OSCE”.