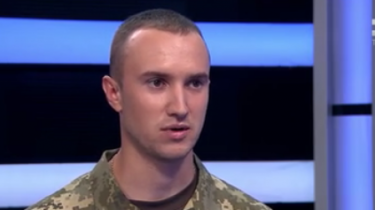 During the fierce fighting in the industrial area of Avdeevka in the first months of 2017 got three shrapnel wounds and four contusions. He personally knocked out an enemy tank “T-72”, joining him in a fire duel.

About the battle at Avdeevka Tarasyuk has told on air of TSN.Week.

“There was a time when our positions were worried about enemy tanks, and a lot of guys were injured. That was the last straw. I’m on time with my platoon commander has prepared a position for which there was a grenade and one day when I passed by, I heard the sound of machinery, and realized that there is a possibility to destroy a tank. He was alone and very clearly popped into my prostrelennoe position. There were already mounted grenade launcher and at that time he managed to make one shot for the guys at the neighboring positions. I shot at him to switch it on yourself. It was shot next to him in the area Gusyanki. After that I corrected and made a new shot that hit him. The tank began to smoke and I thought it was already a victory. For what he was to me the frontal part, which is the most protected, I second shot hit him. He began to smoke. So far, I have reloaded to make a new shot he made the shot for me. Fortunately, he was there.

At the time I thought. The main thing was to perekalivatsja and destroy the tank. I took another shot that was next to him. It hit very close to me. The earth shuddered, but even more eager to destroy it. After I recharged it again in time for me to take a shot. I shot again and hit it. He again smoked. I again peresadivka and wanted to build on the success, but at the last moment out of the smoke flew a tank shell that hit right at my position.

I can’t say that I was saved. A spirit, because I have rejected. Then there was information that the tank was taken away and it no longer works. After that I long could not get out of position. Thanks to another commander with another company, he drove unarmored car and took me out of position”.