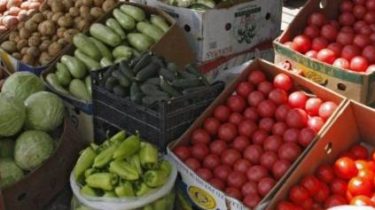 In late August, roadsides, markets and supermarkets are littered with domestic vegetables and fruits. And here’s TSN decided to investigate what is driving the Ukrainians when choosing vegetables.

Market research conducted by Valery Kovalinskaya and she belongs to a powerful opening – “brand grandma” – commercial move that really works and allows under the guise of “home-natural” to sell anything.

The singer and people’s artist of Ukraine Viktor Pavlik has its own proven sellers of vegetables. Providers did not disclose.

“In the same we take and very often it happens that I call a woman and she’s there, too, their whistling and they already know what cut – Pavlik,” says the singer.

Admits, does not neglect even Adami the road. Buys it’s milk and honey. Trading jokes.

“With the grandmothers to sharpen fritters,” says Pavlik.

He is an outspoken supporter of the “brand grandma.” Convinced that the only women in the strings and grandparents in colorful hats sell organic and natural. TSN has decided to conduct its own experiment and find out whether this is so. The journalist has collected in the greenhouse of his grandmother’s tomatoes and went to trade them at a spontaneous market in the capital Lukyanovka.

What tomatoes do Pets seem to notice and buyers. Despite the highest price in this market – UAH 35 per kilogram, the trade is brisk.

Soon the journalist under cover here already believe in its and reveal the card. Colleague recognizes that not all vegetables in the market home. Buy them on the wholesale market on troyeschina, and then resell.

That the brand “grandma” – just a good cover, convinced on other natural market near the metro station “Svyatoshyn.” Tomatoes, cucumbers, herbs, raspberries: sellers unanimously assure – all his own. Attracts the attention of a huge BlackBerry – like in the picture. Personally if grown berries, the clerk is not recognized.

Those who truly realizes its visible to the naked eye. And unfair competition bazarnyi happily rent themselves.

Some vendors say that home-grown fruit and vegetables sold mixed with those that bought at troyeschina.

To acquire on the resale of vegetables can significantly. For example, in the wholesale market at Troeschina blackberries sell for 50 UAH/UAH, and already near the metro station “Svyatoshyn” – 120 UAH/kg. Kherson tomatoes – 20 UAH/kg, and during the resale is almost twice as expensive.

It is not only in Navara – under the guise of eco-products you can easily buy harmful with nitrates.