In the center of the architectural monument fell off the balcony 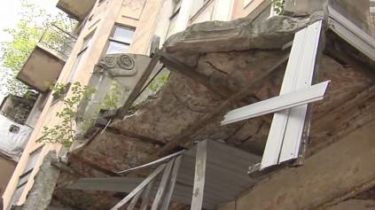 In the center of Kiev, hundred meters from Maidan unraveling a historical monument – the ant estate. The fifth floor balcony fell and smashed a second-floor balcony, according to a story TSN.19:30.

Witnesses say that the place where flying debris for a few minutes before stood the car, but the car managed to drive off, so there were no casualties. Stones and fittings fell from 20-meter height, and in the building among the ruins of a house arranged for the homeless. On top of growing trees, and the smell in the yard and in the manor reminiscent of a public toilet. This state has a monument of architecture, which has more than half a hundred years.

Videorain in the center of the city: in a dilapidated estate of Alexander Murashko collapsed balcony

In 2008, the then Kyiv mayor Leonid Chernovetsky gave the estate to private companies that planned to demolish the buildings and build in their place a hotel-residential complex, but then the estate was able to defend and even to make it in the red book of the cultural heritage of Ukraine. Then there were the lawsuits, the fires, but the choicest piece of land in the centre of the capital, the court turned to the communal property. With all of this building is still living there live two families. “A home draw. The investor sued him and the balance of the KSCA not take him – apparently, someone has a goal not to take on the balance and nothing can be done to have stopped us in silence,” suggests Olga Bozhko.

12 years ago she was given in this house for housing, the government promised an overhaul, but the fate of the money Olga and other people do not know. For the overhaul of a historic building should be about 4,5 million hryvnias, to find that the city has this year. After completion of the work promised to arrange a Museum, gallery or art school, but at what stage these plans – in the KSCA not say. Meanwhile, residents pulled downwards around the house and advise those who are walking Malaya Zhitomirskaya street, stay to the opposite side.