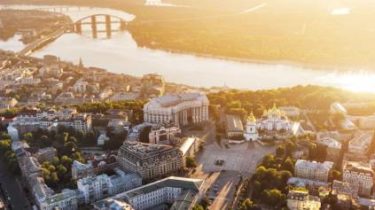 One of the most famous modern architects Fernando Romero visited Kiev. He will lecture to Ukrainian colleagues, and has already met with journalists and said the first impressions of the Ukrainian capital, says the story TSN.19:30.

He settled in a steel and glass hotel in the historic centre of Kiev, but the architecture of the buildings of Mexican not attracted. “This is a normal building, there are in every city in the world, and it adds no value to your country. Commercial project, which earns only money,” he explained. But a different impression from the masters of churches and monasteries. “What struck me most were religious buildings,” admitted Romero.

The three skyscrapers that dominate the Lavra, and the General view of Central Kiev, where the glass giants interspersed with low historic homes Romero annoying, but not surprising. “It is quite normal for the city. You have past all of these historic buildings, and modernity – this is usually a more international style, commercial real estate. And believe me, you’ve got low population density. Only in Mexico city, 22 million people live – you have in the whole country of 44 million. However, I think the style of development similar. Mexico city has quadrupled over the past decade,” says the architect.

It will look like a Ukrainian city in the future. Architects revealed their ideas

Ukrainian architect he advises to live not past, and future. “Understand, it is imperative that I see when you type “Ukraine” in Google. Now it is Ukraine of the past – historical buildings. And you need to build a future. For example, when you go to Australia, even before you came, you can see the building of Sydney Opera house – and this is a picture of the twenty-first century. You arrive in a modern city – that is a real challenge for Ukrainian architects,” explained Romero.