One of the mitigating circumstances for Shufrich Jr. became the pregnancy of his wife 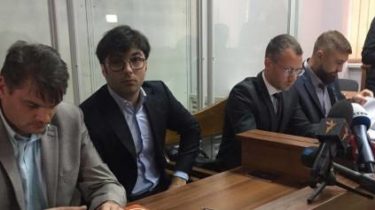 The Shevchenkovsky court of Kiev chose to Nestor Shufrych, Jr., the measure of restraint in the form of taking on responsibility, having listened to arguments of protection of the son of the MP, the correspondent of TSN.

The court today came the father of the suspect, elder brother and three attorneys. The Nestor, Jr. did not utter a word. They talked with the father of the people’s Deputy from “Oppositional block” – the lawyers. They insisted that the suspect after the accident behaved decently, did not run away from the scene, took over treatment of the victim, moreover, does not absolve themselves of guilt and cooperated with the investigation.

The court considered the arguments of the defence, among which the main one was that the wife Shufrich Jr. is on the eighth month of pregnancy. Shufrych Sr. asked the court to consider the fact that it would be a shame if the son would be under house arrest and would not be able to pick up the wife from the hospital.

The judge pondered the decision for more than two hours and took the verdict in favor of the suspect. Shufrich is a senior surety that his son will not leave Kiev and the region will be on call law enforcement and will cooperate with the investigation and will continue to provide assistance.

Instead, the Prosecutor’s office that demanded round-the-clock house arrest, fearing that the son of MP can disappear or put pressure on witnesses.

For assistance the MP provided the arrival of the Israeli doctors. Now Alexey Melnichenko is in a conscious state, it is being treated in a private hospital. Nestor Jr. took the passport, he faces from 3 to 8 years of imprisonment. The parents of the victim claim that you do not want to take revenge on the guilty party, because the family Safrica doing everything possible for the recovery guy.