Russian bridge to Crimea is close to completion – The Guardian 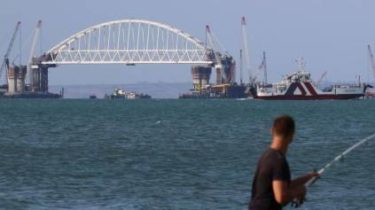 Installation of the railway arch over the Kerch Strait is a key stage in the Kremlin’s plan for integrating the annexed Peninsula.

This writes Shaun Walker in the article “Russian bridge to Crimea is close to completion,” published on the website of the Guardian newspaper.

Russian engineers completed a key phase of the construction of the bridge, which would link the annexed Crimean Peninsula with mainland Russia.

Huge 6-th railway arch was installed at a height of 35 meters above sea level in the operation involving hundreds of workers.

The bridge, which will be 12 miles (19.3 km) in length, must be open to traffic next year, and for rail traffic in 2019. This is the main part of the Kremlin’s plan for integration of Crimea, annexed in March 2014 during a military blitz operation. The international community still considers the Peninsula part of Ukraine and Crimean officials and companies are under the influence of Western sanctions imposed after the annexation.

Occupiers have erected an arch over the Kerch bridge

Crimea is linked to Ukraine by a narrow isthmus, but is separated from Russia by the Kerch Strait. Currently, to get to Crimea from mainland Russia only by airplane or across the Strait on the ferry, which is often canceled due to bad weather.

A bridge for Russia – and the practical need to ensure the infrastructure communication with the adjacent Peninsula, and symbolic, designed to show that Moscow is not going to relinquish control over the Crimea in the near future. Russian officials hope that the bridge will attract Russian tourists to the Crimea, and Crimean wine, and food will be easier to transport in Russia for sale.

Russia closes the navigation through the Kerch Strait

Railway arch forms a segment with a length of over 200 meters, and it is high enough that it could pass judgment. Similar arch for the section of the road will be installed next month. The bridge was called the most complicated construction operation in the history of Russia. It will be the longest bridge in the country, and, according to forecasts, it will cost about 3 billion pounds.

The plan of its construction began to develop soon after the annexation, and it became even more important after a series of blockades on the Ukrainian side. The border between Crimea and rest of Ukraine is heavily militarized, it is characterized by a long delay. The Peninsula was left without electricity for several weeks in a row at the end of 2015 after the Ukrainian vigilantes blew up electrical lines.

The building marks the realization of plans that were in the air for over a century, starting with an indefinite supply of British consortium in the 19th century to build rail links between London and India via the Crimea.

The construction plan of the bridge was developed during the industrialization in the 1930s, with Joseph Stalin, and in 1942, when the Crimea was under German control, the Nazis even began construction but did not finish because they threw the advancing Red army. A railway bridge was built by the Soviets towards the end of the Second world war, but collapsed just a few months later.

Later, the Soviet plans were abandoned because of the huge costs associated with complex geological problems in the area and weather conditions.

Political pressure and the threat of the Ukrainian ports. What are the consequences of the construction of the Kerch bridge

After the annexation, Russian officials have been considering options of how to connect Crimea with mainland Russia, including the tunnel, but in the end, decided on the construction of the bridge.

Building control Arkady Rotenberg, a billionaire who in childhood was a partner of Vladimir Putin in judo, and which has a long history of receiving state contracts for construction during the presidency of his old friend.

Rotenberg stated that the project is important not only money: “in Addition to financial profit … I also want the project had some value for future generations,” he said last year on Russian state television.

According to Russia, the seizure of territory was a response to the will of local residents who overwhelmingly voted for joining Russia on a hastily organized referendum in 2014, which was rejected by the international community as illegal. Since then, human rights organizations criticized the suppression of freedom of speech in the region, while the indigenous Crimean Tatar population reported harassment and arrests.