The world is ready for a normal dialogue with Russia, but subject to the fulfillment of the Minsk agreements – Merkel 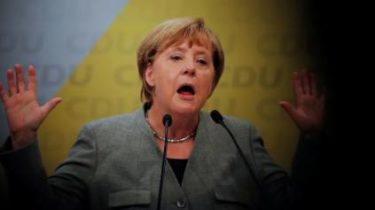 To achieve peace in Ukraine and overall security in Europe is possible through dialogue with Russia. And that he was fine, that Moscow must fulfil all the conditions of the Minsk agreements on the Ukrainian Donbass.

“From the point of view of European security policy and defence we need to make every effort to improve their negotiating contacts (with the Kremlin). This includes, however, also the implementation of the Minsk agreements. If it succeeds, then we will be time to once again to lead a more active and intense negotiations,” said Merkel.

She repeated voiced more than once the idea that to form a European peace order is only possible together with Russia.

According to Merkel, she has always advocated that “despite the major conflicts associated with Ukraine and inviolability of territorial integrity,” not to abandon the dialogue with Russia, in particular, between NATO and Russia, to adhere to the founding act on cooperation between them.

The Chancellor believes it is important to adhere to all disarmament agreements, which were concluded primarily between the USA and Russia.

Merkel also said that he considers necessary for the Germany of nuclear weapons.

“Germany has pledged, among other things, under no circumstances not to use nuclear weapons,” the Chancellor recalled.

The government of Germany, according to Merkel, is committed to a peaceful world without nuclear weapons. The disarmament of the North Korean crisis should force everyone to intensify this process, in which NATO must show a United front, but a decisive role is played, again, Russia.