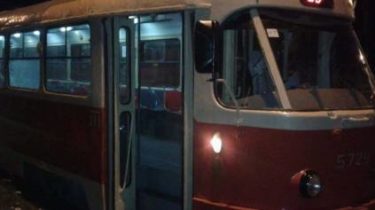 In the capital the night unknown fired into the tram and hit the window, near which sat a girl. Drivers say this is not the first case in this area, says the story TSN.19:30.

“I could die” – says the young passenger, who along with friends back home. From injuries the girl saved her boyfriend. “We sat, had fun. The guy bends me, and I hear a crack. Glass crashed. I’m back – where the bullet hole was,” she says. The bullet passed through and could injure or even kill the girl.

Video settings Solomenskiy district of the capital, unidentified persons fired at the tram

Witness Nikita says that along with the other passengers six times called the police until the patrol arrived. The guy says that the cops Protocol is not accounted for and statements from the passengers are not taken. “The police arrived – took about 40 minutes. They just walked, looked, didn’t even go to the salon. They just walked down the street, had a smoke, stood up and went on,” he says.

In Kiev during the movement caught the tram with passengers

Residents of the neighborhood postrelease tram not surprised – they say that the crime situation in it has deteriorated. Tram drivers say that stretch of track to go with a particular voltage, because there are regularly occurring troubles. “Four days in a row and I threw. Hit the side of the car, nothing broken. Young people some at first threw stones,” said one of the employees of the transport. He argues that every time the police were called, but the attackers still on the loose.