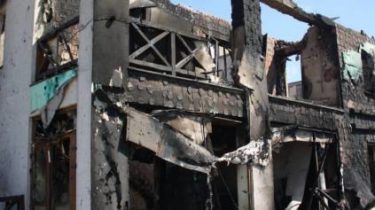 The lowest number of attacks for the last time recorded in the ATO area. The day was marked only four cases short of the fire by the militants, according to a story TSN.19:30.

There were no injuries at all. Military in Marinka, where the journalists of TSN, spent the second night in a row and admitted that he never done that before – two days ago at the same position it was hot. “Covered with AGS, worked tank. After each truce begin their attack,” – said one of the fighters.

The military, given existing experience predict that active hostilities will resume in a week or two. “Not the fact that the same warlords who descend instructions from the leaders ORDO, will adhere to all these rules”, – said the Deputy brigade commander Maxim Marchenko. The army say that the silence time the enemy spends equips and improves their positions. Therefore, the resumption of fighting to get the opponent will be more difficult.

As previously reported, during the Saturday, September 2, in the area of ATO in the Donbas, the Ukrainian military counted four enemy attacks. It is the smallest daily amount over the past month and a half.