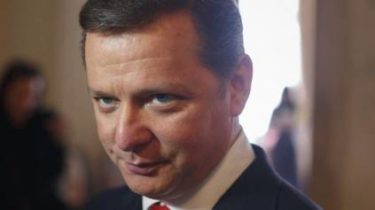 In the spring of 2017, the NAB filed a case against the leader of “Radical party” Oleg Lyashko.

The anti-corruption Bureau suspects of the people’s Deputy of illicit enrichment, and the MP calls the case “a political order”, said in the program “Nashi Groshi s Denis Bhusan”.

The basis for excitation of criminal proceedings the investigations of journalists, where they spoke about the movable and immovable property of the family of the Deputy and his business interests. In particular, in the years 2016-2017 politician who never formally had a business, bought a house for 15 million UAH, – UAH 5 million – bought it the civil wife Rosita.

MPs and their mandates. A list of MPs that took prosecutors

In particular, the interrogation Lyashko, “said defiant behavior, dismissive attitude towards the detectives and prosecutors, whom he insulted with obscene words,” as mentioned in the official report of NABOO.

In June 2017, Prime Minister Volodymyr Groysman called the mother of the leader of the Radical party of Lyashko Love and congratulated on his birthday. Then asked about the experience (30 years) and modest pension (1600 HR). Oleg Lyashko insisted the mother has to summon the Prime Minister to increase pensions. At least 3000 UAH.

In turn, the woman was able to acquire 13 land plots near Kiev, to purchase three apartment in the heart of the capital and a two-bedroom apartment away from the center. Lyashko says that helped her mother with the purchase of real estate.

In 2008, the Love Lyashko lived in the apartment of 47 sq in the village of Varva, Chernigov region and worked as a boiler operator. Even after the rise of the political career of his son, the mother continued to work in the boiler room until his retirement. After retirement Love Lyashko in a big way as a successful businessman started to buy expensive capital and real estate to numerous areas beneath the city.

“In 2008, the government transfers land to the mother of the radical MP, and some other of his relatives and even party members. So, on 2 hectares of land in Vyshgorod district (s. Nyzhcha Dubechnya) allocated: Oleg Lyashko, Love Lyashko (MP’s mother), lolita Fedotova (sister of the civil wife of MP), the Ioannina Belogurova (half-sister Lyashko), Alexander Belogurova (husband’s sister) and two members of the same party-the radicals: Sergey Kirichenko Alexey and Lena. Land is allocated by a separate order of Vyshgorod administration. Personally for “lyashkovtsev”, – stated in the investigation.

Thus, the plots were divided into smaller and already partially sold for development. In particular, the leader of the Radical party, already got rid of this property, but his mother still owns in Nyzhcha Dubechnya family plots.

And land in Vyshgorod district Love Lyashko did not stop. In 2008, she acquired another four sites in Brovary district of the capital, on the Bank of the Desna river in the village of Pukhivka, and for several years bought here has two sections. So now in the Puff the mother of the MP owns six land plots with a total area of 3/4 acres.

Further, in 2012, it acquired three apartments of 100 square meters each, in the center of Kiev in the elite building on Shchorsa 36 V. for the year a woman sells all three apartments. One of them for a cheap price of 120 thousand hryvnia – the godfather and the Deputy Lyashko, Yuri Sugino.

Currently, the mother Lyashko was only one car in Pechersk. But in 2016, she purchased a two-bedroom apartment, whose market value is over 1.5 million.

The Deputy himself, although it has two apartments in Kiev, lives in a house for 15 million UAH in Kozyn. This property is hidden behind a fence with a minimum height of two meters and it is strictly guarded.

However, there is Lyashko’s private house where he takes journalists. In 2014, the MP showed his home to journalists. Then he admitted that the last money spent on this is still unfinished housing. Consequently, if the MP spent the money and purchased a property – it should appear in the Declaration in 2014, or in subsequent years, but no. This house recorded from the beginning of a little sister-wife Lyashko – lolita Fedotov. Rosita Sairanen convinced that the house was bought by her sister: “took out a loan and bought.” That is, the words of Oleg Lyashko on the latest money – another performance for journalists.

It is from this home on the Mercedes GL 550 regularly travels wife Lyashko Rosita Sairanen. Like the house, the car is missing the Declaration of the MP. Mercedes officially recorded close to the representatives of the radical party, Anton rose.

Another undeclared car – Toyota Land Cruiser, on which the people’s Deputy Andrey Lozovoy Oleg Lyashko arrived at MIA on the day of removal of parliamentary immunity. Machine recorded on lolita Fedotov.