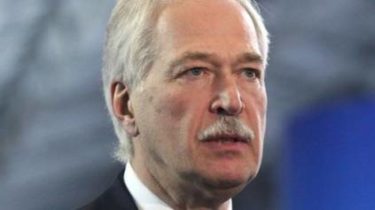 Russia wants approval on a permanent basis the special status of Donbass before the introduction of UN peacekeepers on the demarcation line.

This was stated by the Plenipotentiary representative of the Russian Federation in the Trilateral contact group (TAG), Boris Gryzlov, Interfax reported.

“The deployment of UN peacekeepers on the contact line in the Donbas will become real only after Ukraine will make the law on the special status of Donbass is fundamentally important amendment,” he said before the meeting of the TAG.

Gryzlov drew attention to the fact that these amendments should be agreed within the contact group.

“They will concern the introduction of a special status on an ongoing basis according to the formula Steinmeier”, – he explained.

We will remind, Putin on 5 September in China said that it supports presence of UN peacekeepers in the Donbass. In his opinion, they should guarantee the security of the OSCE mission. In addition, the head of the country-occupier believes that the introduction of the peacekeeping contingent should occur in coordination with the leaders of the terrorists “LNB” and “DND”.