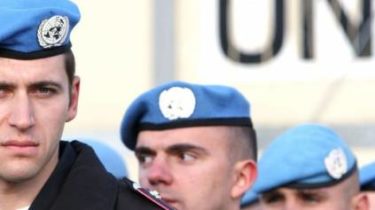 The Federal government of Germany considered that in the case of sending a UN peacekeeping mission in the Donbass “blue helmets” will need place throughout the conflict, and not just on the frontline.

On Wednesday, September 6, said the Deputy official representative of the government of Germany Ulrike Demmer, speaking to reporters in Berlin, reports the news Agency dpa.

According to the press Secretary, Berlin welcomes in General the initiative of the Russian President Vladimir Putin’s sending of the UN mission in the Donbass. However, some of the details of Moscow’s proposal to Berlin considering skeptical. According to Demmer, it is unclear whether it will be possible to reach agreement on all the details of such a mission in the Donbas.

She also sees no reason to provide in this question to separatists in the Donbass voting rights on the negotiations on such a mission.

“That would not be acceptable by increasing the value of the self-proclaimed leadership of the so-called people’s republics”, – stressed the representative of the German government.

Recall, Russian President Vladimir Putin on 5 September in China said that it supports presence of UN peacekeepers in the Donbass. In his opinion, they should guarantee the security of the OSCE mission. In addition, the head of the country-occupier believes that the introduction of the peacekeeping contingent should occur in coordination with the leaders of terrorists “LNR” and “DNR”.

The foreign Ministry stressed that Putin with his statement wants to distort the idea of the peacekeeping mission and present aggression in the Donbas internal conflict of Ukraine. The diplomats also recalled that in 2015 the head of Ukraine Petro Poroshenko has officially sent to the UN request to deploy peacekeeping operations, but Russia as a state aggressor constantly sabotaged the proposals of Ukraine, refusing to consider the appeal to the UN security Council and even claimed that the treatment was not.