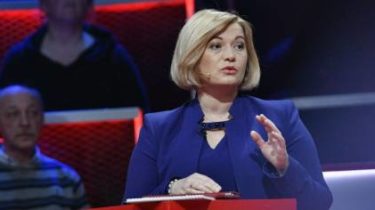 The Ukrainian side is ready to exchange prisoners with the militants.

This was written by a member of the humanitarian sub-group of the Trilateral contact group on conflict settlement in Donbas, first Deputy Chairman of the Verkhovna Rada Iryna Gerashchenko in Facebook.

“In the presence of the OSCE confirmed transmitted the proposal for the immediate release of the hostages, we demand the release of 87 Ukrainians, whose location we have found. The Ukrainian side within the framework of the compromise up to 309 people, just to get our. It is important that ORDO no longer deny the hold 87 of Ukrainians from the list 144, we hard-to-find information about each and fighting for their inclusion in the lists,” she said.

Now the Ukrainian side expects to reply to the formal compromise proposal.

“The stumbling block: the requirement to release the criminals and terrorists who do not fall under the Minsk agreement, because this is unacceptable”, – said Gerashchenko.

Minsk. The humanitarian sub-group, where the Ukrainian side was represented by V. Medvedchuk, and experts from the SBU and V. Lutkovska. …

We will remind, Ukraine is known about the whereabouts 87 of 144 Ukrainian hostages in the occupied areas of Donetsk and Lugansk regions. However, in the last meeting the group in Minsk, representatives ORDO confirmed only 71 people. Herashchenko stressed that Ukraine is the issue of exchange of prisoners is ready for broad compromise. The last few months, representatives ORDO demand the release of 43 people who have no relationship to the zone of ATO.