The court arrested 10 Swiss Bank accounts of the son Azarov 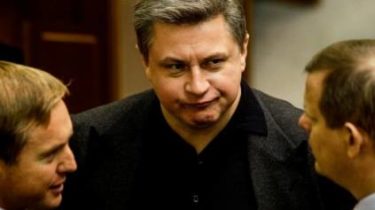 10 Swiss Bank accounts of the son of the former Prime Minister of Ukraine Mykola Azarov Alexey arrested by the Pechersk district court.

It is reported by Gromadske with reference to the corresponding decree of the court.

Arrest petitioned the General Prosecutor’s office, which is investigating the case concerning the illegal enrichment of Azarov Jr.

The investigation found that from 12 December 2012 to 27 November 2014 Alexei Azarov from the post of MP, received from unidentified sources 7 700 thousand euros, 600 thousand Swiss francs and 500 thousand dollars. All the money were placed in banks in Switzerland, Italy and Liechtenstein.

The investigator of the GPU noted that the arrest of the Swiss accounts Alexei Azarov “necessary to ensure the effectiveness of criminal proceedings and the indemnification caused to the state through the Commission of a crime”.

We will remind, the court seized on three plots of land and housing in Kievthat belong to ex-Prime Minister Mykola Azarov. The property was arrested in the framework of criminal proceedings against Azarov.