The debtor number one: from Kiev owes the utility nearly half a million hryvnia 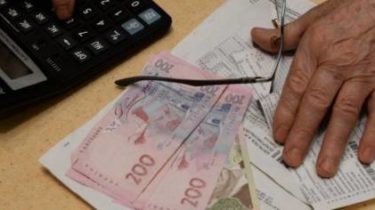 Record debt for utilities in the capital has a mother-heroine Love Golak. She lives on the outskirts of Kiev, says the story TSN.19:30.

It’s an abandoned 9-storey “socket” with a dirty entrance, broken mailboxes, stench and bad lighting. Golac lives in an apartment on the first floor. “I have 12 children and 16 grandchildren,” she says. Earlier the woman worked at the factory Antonov, the government has allocated as much as four apartments with a total area of 200 square meters. In fact, it is the whole floor, which is considered as one continuous living space. Counters nor water nor gas the woman has not. “Here is spelled out 26 people, you know? Not enough apartments, not enough room, what can I do?”, – she complains.

Videots found the largest debtors of the capital, who basically do not pay for utilities

Family Golak owed for hot water heat and 199 thousand hryvnia, and the same with other utilities – in total nearly half a million hryvnia. Why is debt so much, the woman does not understand, but blaming adult children. “I don’t want the senior to pay, what can I do? Some not working, others is still small,” she says.

Another “top” debtor – Ponomarenko’s family, where the story is the same, only with their own variations – 11 children and 14 grandchildren. “Only 21 people in four apartments” – says the woman of venerable age, which is the proprietress of the housing. The Department of social policy of Kyiv city state administration with these families and familiar claim that women receive financial assistance for children, but fundamentally do not pay for communal. “People of working age do not work, use only the assistance from the state, these funds live. To get to a job, we unfortunately can’t,” officials say.