In a car explosion in downtown Kiev, woman severed leg 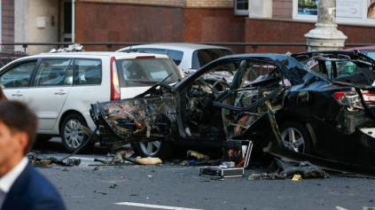 In the center of Kiev near the Bessarabian market was a car bombing. The male driver was killed, for the life of his wife fighting doctors, according to a story TSN.19:30.

In the first minutes after the explosion, the witnesses were scared, people could not navigate what’s going on. The wreckage and remains of human bodies were scattered dozens of meters. The explosion killed known in criminal circles Temur Makhauri, who is known as close to the Chechen community. It was not the first attempt on his life.

Video settings the center of Kiev exploded a car

In the car with him were his wife and child. At first it was reported that it was random people, not relatives Makhauri. Subsequently, however, police reported that the injured woman is the wife of the deceased driver. In the tragedy she lost a leg. Woman save in the 17th hospital in the capital.