In the draft budget laid 2018 forecast economic growth at 3%. 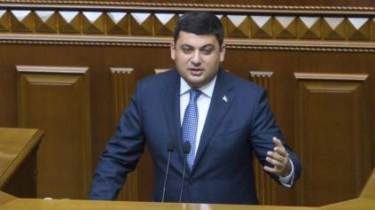 The Cabinet of Ministers of Ukraine establishes in the draft state budget for 2018 forecast economic growth at 3%, and also saves the cost of providing defence and security, support education, healthcare and targeted programmes for the development of production.

This was stated by Prime Minister of Ukraine Vladimir Groysman, transfers a press-service of the Cabinet.

“The draft budget we provide defence costs for road construction, decentralization, support of education – pledged 1 billion in upgrading primary schools to the agricultural sector – a total of about 7 billion, including 1 billion to support farmers. We will also support the program “Affordable medicine” and other economic programs … the Budget is structured based on three-year macroeconomic forecast. In particular, GDP growth of 3% in 2018, ” – said Groisman.

Groisman spoke about the priorities of the state budget-2018

We will remind, the Ministry of Finance on 6 September introduced the Cabinet of Ministers the draft state budget for 2018.

As reported, the President urged to refrain from the abolition of the unified tax in the budget for 2018.