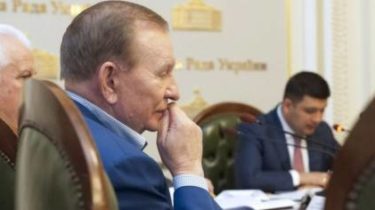 A format of input of peacekeepers to Donbass from the Russian President does not suit Ukraine. This was stated by the representative of Ukraine in the Tripartite contact group Leonid Kuchma .

He said this at a briefing in the river, “Interfax-Ukraine”.

“Russia wants to drive into a corner the situation, then what we don’t know how to leave,” he said.

Kuchma also noted that in the form in which Russia proposes the introduction of peacekeeping troops, “we absolutely do not like”.

Earlier, Putin said that he supports the introduction of UN peacekeepers to the occupied territory of Donbass, however, these forces should only be on the boundary line.

Earlier it was reported that the President Petro Poroshenko plans in the coming months to submit to the UN General Assembly the idea of deployment of peacekeeping mission in the Donbass. During preliminary telephone conversations of the leaders of the “Normandy format”, he stressed on the need for the introduction in the Donbass UN peacekeeping mission with the mandate of the UN security Council.