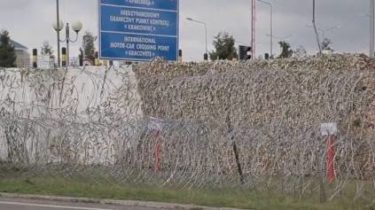 A few days ago the checkpoint “Krakovets” on Ukrainian-Polish border was fenced coiled wire that stretches to the left and right of the gate entrance. Here it should arrive deprived of Ukrainian citizenship Mikheil Saakashvili.

The guards would not comment on the situation, but unofficially it is known that such measures are taken in order to exclude penetration of the activists on the border. Also before entering the checkpoint a few weeks ago I installed command and staff vehicles of communication, it is connected, according to Gasparrini services, with increased security measures in all areas of Ukrainian border because of the Russian-Belarusian exercises “West-2017”.

It is expected that on 10 September the former head of the Odessa regional state administration and the leader of the party “Movement new forces,” Mikheil Saakashvili plans to travel from Poland to Ukraine through the “Krakovets”.

His supporters gather on this day of public action and promise to lay out a camp near the checkpoint.

We will remind, the President Petro Poroshenko, Saakashvili while getting the Ukrainian citizenship, has filed documents with false or falsified information. That’s why he was deprived of citizenship. The lawyer of the politician Paul Bogomazov zapevnyv that Saakashvili did not get a ban on entry.