Under the Verkhovna Rada there were clashes between activists and police 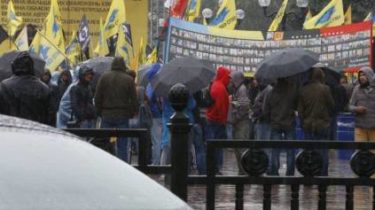 Under building of Verkhovna Rada, the activists of the number of owners of cars with foreign numbers got into a fight with the police under the cries of “shame”.

Video of the clashes were posted in Facebook organization “Auto Euro Power”.

The video shows the police retreating from protesters, and around developing a smoke. Activists shouting “shame” and push forward. Protesters trying to get closer to the Parliament building, pushing police officers.

In the end, the police took away the activists of the bus and they decided to end the picket.

Video settings Ukraine, the growing confrontation between the state and owners with foreign number plates