“Close all doors”: passenger “intercity” does not want Saakashvili again got on the train 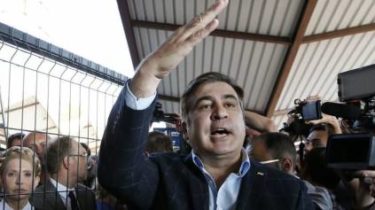 The former head of the Odessa regional state administration Mikhail Saakashvili after arriving at the train station in Przemysl another train to the Ukraine wants to go by train that was not allowed to go to Poland.

In particular, at the train station in Przemysl he said he returned to the same train, who from the beginning wanted to go to Ukraine.

In turn, the passengers remained dissatisfied with the decision of Saakashvili.

Broadcast live from Poland to hear what they were saying, “close all doors” or “let’s go in here will not come”.

By the way, earlier “Ukrzaliznytsya” explained why the train “Kiev-Peremyshl” went from Poland.

Recall, the steward of the first IC hid in the compartment and refused to let the train with Saakashvili inside. About 20 MPs tried to convince the train conductor No. 5 in the name Inna, which is the former head of the Odessa regional state administration mhel Saakashvili to move the train. At first the steward was hiding in the compartment, until it came the passengers demanding to drive train, in particular, it was a woman who said she was pregnant, and elderly lady that said she had diabetes. Deputies tried to find out from her why the toilets are closed.

Train “intercity”, where Saakashvili was planning to enter Ukraine, with a delayed departure to Ukraine. First on the loudspeaker announced that “the Ministry received information about the presence on Board of persons who do not have the right to enter Ukraine.

Saakashvili earlier it was going to arrive in Ukraine via KP “Krakovets” on the bus with journalists. In STSU noted that is not going to pass Saakashvili to Ukraine, so he should pick up a passport (domestic and two foreign) and return back to Poland.