Steward IC hid in the compartment and refused to let the train. 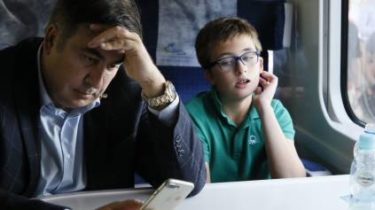 About 20 MPs tried to convince the train conductor No. 5 in the name Inna, which is the former head of the Odessa regional state administration, Mikheil Saakashvili, to move the train from the place.

At first the steward was hiding in the compartment, until it came passengers with the requirement to send the train in particular, it was a woman who said she was pregnant, and elderly lady that said she had diabetes. Deputies tried to find out from her why the toilets are closed.

Also, the deputies who support Saakashvili, tried it to find out why it is not possible to send a train. Steward by the name of Inna stated that they have not received instructions from the top. At the same time, the MPs told her that she can expect a prison, they see her actions criminal liability, because, according to them, I have a duty to verify the authenticity of passports Saakashvili and decide whether it has the right to be or not to be in the train for any other reason than the availability of the ticket. In particular, such clovami turned to her lawyer Serhiy Vlasenko, former Yulia Tymoshenko’s lawyer. He said that the steward acts in his time did the judge Kireev.

Steward Inna refused to comment on the question of journalists.

Subsequently, the steward announced that “the indication was from the Ukrainian-speed railway company”, although at first the speaker said that it was on the orders of national police. Although the police of such applications denied.

Recall that Mikheil Saakashvili earlier it was going to arrive in Ukraine via KP “Krakovets” on the bus with journalists after a lunch on 10 September he said that he will enter Ukraine on “intercity”to avoid provocations. In STSU noted that is not going to pass Saakashvili to Ukraine, so he should pick up a passport (domestic and two foreign) and return back to Poland.