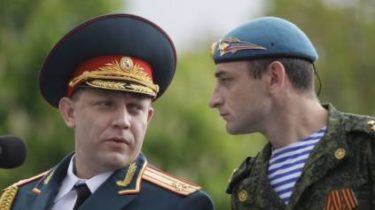 The leader terrorist “DNR” Alexander Zakharchenko declared that is ready to discuss with Kiev the conditions of stay of the peacekeeping mission in the Donbas.

He told about it in interview to the program “week” on NTV.

“We mean the following: is the protection of the OSCE mission. This is not a direct peacekeeping mission. And we are ready to discuss with Kiev these conditions concerning the stay of the mission”, – said the leader of the militants.

Earlier, Zakharchenko said that “DNR” are ready to consider the initiative about the introduction of the peacekeeping mission in the occupied Donbas and insist that the parties to the negotiations had expected the approval to approve changes in the format of conflict settlement.

Poroshenko had previously stated that no negotiations with the militants on the placement on the territory of Donbass UN peacekeepers can’t be.

Recently, the head of the Russian Federation Vladimir Putin has declared, that supports introduction of UN peacekeepers to the occupied territory of Donbass, however, these forces must be only on the demarcation line and that their basic mission – to protect the OSCE.

The foreign Ministry said that Putin issued a statement wants to distort the idea of the peacekeeping mission and present aggression in the Donbas internal conflict of Ukraine. The diplomats also recalled that earlier, the head of Ukraine Petro Poroshenko has officially sent to the UN request to deploy peacekeeping operations, but Russia as a state aggressor constantly sabotaged the proposals of Ukraine, refusing to consider the appeal to the UN security Council and even claimed that the treatment was not.

Russia gave the UN a draft resolution on the placement of the peacekeeping mission in the Donbas. Its resolution subsequently filed and Ukraine.