The national police denied the delay sending from Poland “intercity”. 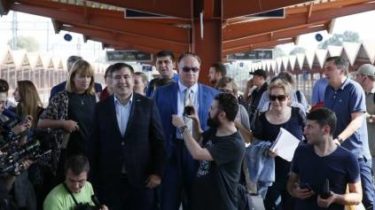 In Napoli of Ukraine declared that have no relation to the delay of the train “Przemysl – Kyiv”, which departs from the station due to the fact that the train is the former head of the Odessa regional state administration, Mikheil Saakashvili.

This is stated in the press service of the National police of Ukraine.

“In response to statements by some politicians and public figures concerning the delay of the departure of trains “intercity” message “Przemysl – Kyiv” allegedly on the orders by the police, remember. The work of the national police of Ukraine is guided by the Constitution of Ukraine, laws of Ukraine and other normative-legal acts. So, the national police has no relation to the schedule of departure of rail transport. This issue is not within the competence of national police activities,” – said in the message.

In addition, the press service added that the national police of Ukraine is not empowered in respect of any activities on the territory of foreign States.

Recall that Mikheil Saakashvili earlier it was going to arrive in Ukraine via KP “Krakovets” on the bus with journalists. In STSU noted that is not going to pass Saakashvili to Ukraine, so he should pick up a passport (domestic and two foreign) and return back to Poland.