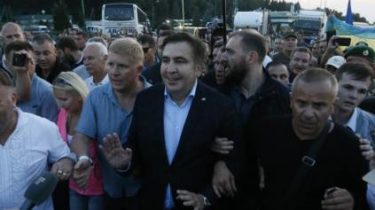 After several hundred supporters of Mikheil Saakashvili helped him to break through the checkpoint “shehyni” on the territory of Ukraine, ex-Chairman of the Odessa regional state administration went to the city.

About it from a place of events the correspondent of TSN Marichka Cogic.

Saakashvili, accompanied by his supporters walked about three kilometers already on the Ukrainian territory and then got on the bus and drove towards the city.

Near city hall, he plans to give a briefing to reporters at approximately 22.45.