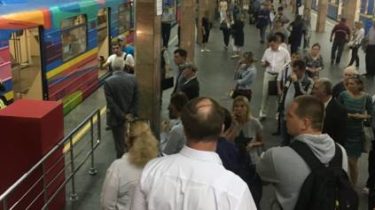 Near the closed metro stations of a blue branch in Kyiv there are fewer people. Near the station “Kontraktova square” resumed the movement of vehicles, according to a story TSN.19:30.

Rescuers who climbed out of the ground, said a preliminary version of the incident, which created inconveniences for the people of Kiev – in the stretch metro was a problem with the electrical system. “Short fuse between two stations”, – said the employee of the DSNs at the scene.

Eyewitnesses say that the train that first hit the smoke trap and stopped in the tunnel between “Kontraktova square” and “Taras Shevchenko”, I started to panic. In particular, in the second wagon people tried to break the door and get out, because smoke billowed in the window, and a fire extinguisher in the car is not found.

As previously reported, the press Secretary of the Kyiv subway Natalia Makogon claims that the situation is under control and the threat does not bear. “A strong smoke. Rescuers find out all the details. All the passengers at the stations evacuated, no casualties there,” she says.