September 11 is etched in my memory: Poroshenko expressed condolences to US on the anniversary of the bloody terrorist attack 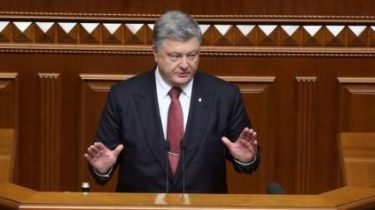 September 11 is forever etched in my memory terrible shots against humanity and humanity.

About this Facebook said the President of Ukraine Petro Poroshenko.

“Offense, which radically changed the perception of security worldwide. A cynical attempt to sow fear and terror, which once again confirmed the inviolability of the spirit of a democratic society”, – stated in the message on the social network.

Video settings the United States of America remember the victims of the 11.09.2001 terrorist attack

“There can be no excuse for those who attempt to exploit religious feelings for the cultivation of hatred and achieve their dirty political goals. Wherever it happens and whoever it was carried out. And the current struggle of the United States for the secure world is not only their own struggle. It is our common responsibility and duty,” – said the head of state.

16 years ago footage of a terrible disaster shocked the world. Then, in the US a tragedy occurred that forever changed the lives of millions of people. Two aircraft “Boeing-767” every 17 minutes crashed into the world trade center towers. From powerful blow and fire building collapsed.

Large-scale terrorist act took the lives of 2733 people. And the attack had no boundaries – under the rubble were killed, representatives of 115 nationalities. Among the victims of the attack were 12 people from the Ukraine.

It took firefighters 100 days to extinguish all fires. All rescuers had to sift through 1 million tons of rubble and debris in search of items belonging to the victims of the terrorist attack. They found 144 wedding rings. More than three thousand children lost one parent.