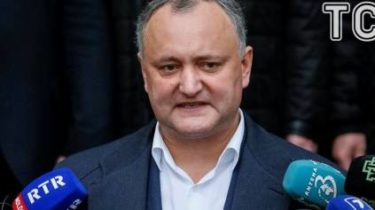 The President of Moldova Igor Dodon hopes that Ukraine will refuse the new education act because of the violation of the rights of national minorities.

“Expressing concern at the situation of the large community of Romanians and Moldovans living in Ukraine, community, which is currently at risk will be subject of denationalization as a result of the unjust law imposed in Kiev”, – wrote the Dodon.

According to him, the new education Act will lead to the abolition of the system of education in the native language of the ethno-cultural minorities in Ukraine.

“It was followed by a huge number of responses from Romanians and Moldovans living in Ukraine, as well as from other ethnic groups, who are asking for help from neighboring countries and international organizations, and urge them for immediate response.Understand their concerns and, as President of the Republic of Moldova, appeal to the Kiev authorities urging them to reconsider their new policy towards ethno-cultural minorities”, – said the President.

Dodon stressed that in Moldova the rights of Ukrainian communities were, in particular, there are a number of schools teaching in the Ukrainian language.

He hopes that Ukraine is aware of the negative impact of this law and make the appropriate steps to abandon it.

In Ukraine are fundamentally changing the education system: 12 years of school, items to choose from and a 3-year bachelor degree

Recall, September 5 during a meeting of the Verkhovna Rada of Ukraine adopted the law of Ukraine “On education”, which introduced the 12-year secondary education. The decision was supported by 255 MPs out of 359 registered in the session hall. Did not vote for the law “Opposition bloc” and the deputies group “Revival”.

The language of instruction in educational institutions determined by the state. The document envisages that the institutions can give one or more courses two or more languages – the state language, English and also in other official languages of the European Union.