Classics of the XXI century: in Italy held a Symphony concert with a robot conductor 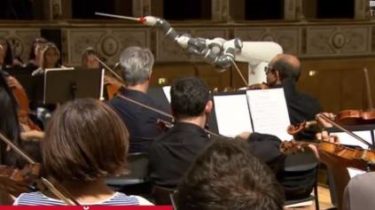 In the Italian city of Pisa hosted an unusual concert. Famous Opera arias and sonatas in the concert hall by professional musicians performed under the close supervision of a white Android, says the story TSN.16:45.

World-renowned tenor Andrea Bocelli it took iron self control to begin an Aria with the same conductor. “This evening – a revolution in robotics. It demonstrates how easily and intuitively the robot can learn new programs,” says General Director of the developer company Ulrich Spiesshofer.

Video-music Android: in Pisa there was a concert conducted by the robot

Professional conductor of the Philharmonic orchestra, Andrea Columbine laughs that learning the job is not difficult – a person would be more hassle. “It would take some time to understand how it moves. After that, everything went like clockwork. Extremely flexible hands, incredible, it’s absolutely fantastic. And technology have helped us to make everything perfect – the length of time of each gesture. It’s very important,” he explained.

However, the musicians say that with a mechanical conductor and is mechanical. “It is an interesting experience, but unfortunately, no place for improvisation. No, I don’t think it’s our future,” said the cellist brad repp. But since the Japanese robot violinist introduced ten years ago, in the near future should wait for the first fully electronic orchestra – can only think of the work of the critic, who will write him a response.