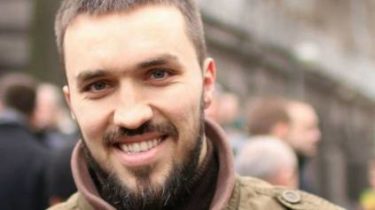 Andrew Katyshenka, which used to be called a party attack on the border guards while crossing the border Mikheil Saakashvili, assured that the video with the beating of security forces are not he.

This was reported by the press service of the “Movement of new forces.”

Saakashvili signed the Protocol, but with their applications

Earlier the adviser to the interior Minister Anton Gerashchenko declared that he was detained “titushky” Saakashvili Katyshenka, who participated in the attack on employees of the SBGS September 10. Also on his page he posted a video with a man who has security forces and bore down on them from behind.

Published by the Anton Gerashchenko 12 September 2017

He Katyshenka claims that it has revised the entry and it is not he.

“I have revised this video and made sure it wasn’t me. Even some of the police officers who watched this video with me and said that it wasn’t me. Then unknown to me, the investigator approached and asked what the clothes were there. My question is, where there, he refused to answer”, – he stressed.

The man claims that the police came to his home at night in Cherkasy and insisted that he was going with them to the lions. In Facebook, he wrote that he was discharged.

In the message of the political forces noted that Katyshenka with lawyers is going to make a statement about his abduction by militiamen.

We will remind, deprived of citizenship , Saakashvili in late July, when he was outside Ukraine. He is a politician promised to return September 10. He entered the territory of Ukraine through KP “shehyni” that in Lviv region, although I was going to make it through KP “Krakovets”. To the border he got on the bus and illegally crossed it, together with 60 persons. Some of them have used force against the guards.

The state border service of Ukraine announced a breakthrough in the checkpoint “shehyni”, which Mhel Saakashvili went to the territory of Ukraine, massive illegal violations of the state border.

currently, Saakashvili is located in Lviv.

VideoCAM Saakashvili and activists broke through the border of Ukraine