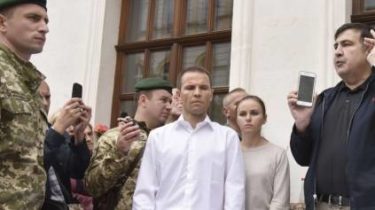 Lviv border guards and police came to the hotel, where he stayed Mikheil Saakashvili. After a few hours aldomovar and policy discussions has signed the administrative Protocol on illegal border crossing, but with your application that do not agree with the accusation, according to a story TSN.19:30.

“They say there was a breach of boundaries. A complete lie, that’s the law, we have complied with each of the rules, and they violated every norm of the special law on the state border”, – said the former head of the Odessa region. Immediately after the signing of the border guards announced Saakashvili the date of the proceedings – 18 September, he should come to Mostyska district court. “This article provides for the payment of a fine from 3,400 to 8,500 hryvnia,” – said the representative of the Western regional Department of state frontier service of Ukraine Volodymyr Sheremet.

Videogruppa Saakashvili: fifty men in camouflage uniforms broke camp in the city near the city

In addition to Saakashvili, the protocols on administrative offences made up a further 14 people. It’s mostly his colleagues and journalists who covered the event. In an interview with TSN Saakashvili said in court will come, but first will travel to Ukraine and meet with fans. Today he was walking around Lviv, took pictures with the citizens, and then in the first place will visit Chernivtsi and Ivano-Frankivsk.