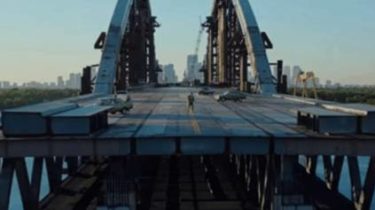 In recent times Kiev has become a location for filming creative advertising. After the success of the movie for a new generation of the Apple Watch, shot on a Metropolitan train station, have collected for you a small selection of promotional videos with native landscapes.

Made in Ukraine. Top 10 videos of foreign performers, shot in Ukraine

Japanese automaker Mazda has found a great use unfinished bridge-metro at hem – made him a set. The performed racer the Stig from the British motoring show Top Gear – bill Collins.

This is the bridge again appeared in advertising Italian brand Diesel. The company’s slogan was “Go with the Flaw” (“Follow-the-disadvantages”). In the video one of the characters dancing in the background of an unfinished building. Was shooting under the leadership of the Ukrainian company Family Production.

Pleased everyone who loves Kyiv, and touching and atmospheric promotional video for the French brand Lacoste, which was filmed in the Metropolitan subway. It was created by Ukrainian production company Radioaktive Film, along with the Studio Betc Paris, and the footage can be see “Vydubychi”.

But advertising for smartphone from Motorola was filmed at the metro station “Zhitomir” and in the capital airport “Borispol”.

Well, the icing on the cake, suddenly you have missed during the presentation of new products from Apple in the Steve jobs showed a video advertising the “Apple” hours of new generation. In the video, the people of Kiev and guests of the city easily recognizable Central station and the metro station “Golden gate”. Participated in creating a video of the Ukrainian production company Radioaktive Film.