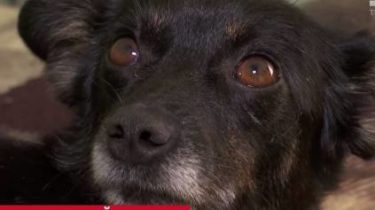 On Odeschin mongrel sheltered two kittens and became so fond of them that she suddenly had the milk, so she began to suckle foundlings. The owner of the dog is surprised and the vets explain what although rare, but it happens — the dog felt like a mother despite the fact that spayed and kittens now do not depart from her, says the story TSN.19:30.

Five Tusi not only nurses the kittens with her milk, but like a true mother, constantly licks her adopted calves and even protects you from other dogs on the street. The mongrel Tatiana Melnik picked up on the street near his dacha — who twice tried to poison the animal. Woman come out of her, and subsequently, when taking out the trash, in a dumpster and found two newborn kittens, which took her home, washed away the dirt and hid in the closet, to toucy not bitten them.

But to climb to the second floor and feed them a pacifier it was difficult, so a box of Sagami placed near his bed. “Party time – and there. I was horrified to come, and she lies there and looks at me, just human eyes – well, just the tears in his eyes. They Began to suck on it, two days later, look – she’s got mammary glands has increased,” – says the owner of the animals.

In Odessa, the foal became disabled due to the fact that he was forced to carry tourists

Veterinarians explain that the dog triggered the maternal instinct, and the hormone prolactin triggered milk production. “There was a case in our practice when a cat appeared lactation, and he nursed kittens. That is, a person of the opposite sex at all,” says veterinarian Irina Malpani. The dog helped his master to take care of the kittens and her milk has allowed the kids to develop faster. “Perfect mom,” admits Tatiana Melnik.