The police will deal with the behavior of the defenders of Saakashvili, which prevented the guards 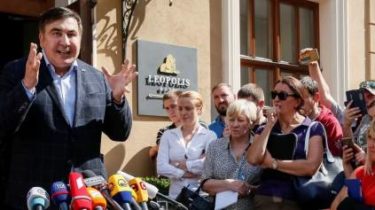 In fact the obstacles to the State border service employees to declare to Mikheil Saakashvili about administrative violation at the time of crossing the state border will deal with the police.

This was stated by the employee of state tax service of UKRAINE, which is now the hotel “Leopolis”.

According to him, is a violation of norms of the legislation in terms of preventing activities to law enforcement authorities.

Recall that today, September 12, at 7:00, the guards arrived at the hotel, where Saakashvili to declare verbally to him on adminnarushenii of crossing the state border. The disgraced politician was released. Instead, with the guards say lawyers and activists.

Videomichael Saakashvili after crossing the border he settled in Lviv