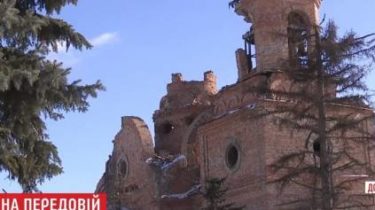 The village of Sands near Donetsk after a few weeks of relative calm has experienced a blow 120 caliber. Soldiers for hours were forced to hide in a bomb shelter, and then the rest of the night they were assailed by shots of Russian infantry fighting vehicles, according to a story TSN.19:30.

“Ceiling, the building was shaking,” – told about the shelling of the military. According to them, the bulk of the shells overshot their position and exploded somewhere in the village. However, he’s already so destroyed, that to distinguish fresh tracks from old hard. At the end of the summer, almost all Sands utterly burned with incendiary shells. “The village is almost there. To come back here peace is impossible,” – says the military.

Videodokument led powerful attacks on the village of Sands

An example would be the local Church, from which each time is less. It left almost no walls, for cover – the enemy is defeated the second floor and methodically finishes off the first shots from the tanks. But the Church in occupied territory shining Golden domes of the Ukrainian military at the Shrine do not shoot, unlike terrorists.

Fire from machine guns on the outskirts of the Town and the fire near the Donets. Digest ATO

Fighter Balu believes that the night attacks from infantry fighting vehicles and heavy machine guns the enemy is trying to provoke counter-fire, which unmasked the position of the APU. “Guns have provoked that we returned fire from their emplacements. The tank would see the flash and worked on our firing points. We didn’t do that,” explained the warrior.