Ferret, snake and turtle in OKHMATDYT Kyiv zoo had a party for sick kids 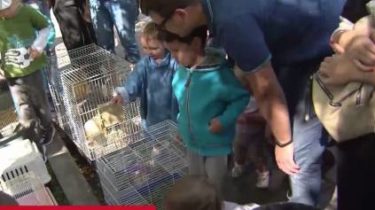 The capital’s zoo on the day he moved in “OKHMATDYT”to small patients could distract from the heavy treatment to get into children’s hands, the animals underwent a rigorous selection process, says the story TSN.19:30.

Children could go only healthy and non-aggressive animals. “They regularly pass inspection, not to be parasites, and common illnesses with people,” say the vets. They were guided by the fact that the animal also needs to get pleasure from communication with children, and children with her. It also requires training: increase the number of people, the access of unauthorized people to the animal to get used to crowds and strangers.

The coati, chinchilla, decorative rat, Chilean squirrel – all excited, running around the cells and sniffing. Their children will not be given, but to go on the handle ready rabbit, ferret and Judy Fedor, who loves attention and always gets it. The children also went Guinea pigs, tortoise, raccoon, milk snake, goat and sheep. Ungulates immediately gather around the crowd, but the reptile only suitable for the bravest.

Children quickly determined with the Pets – a raccoon and a hare. Through fun animals, the children even forgot about the treatment, the parents transferred the procedure to extend the moments of happiness for kids. “The moral health of the child is sometimes more important than the physical,” explained one mom. Children “Ohmatdyt” for months, and sometimes years, living in constant stress, anticipation of painful procedures, irritated the adults around scaring the kids. Such meetings not only distract and delight, but is part of the therapy. “They can relax, to switch, to gain these positive emotions, to just be a kid, to pleasure of communicating – it’s very draining emotionally and creates a positive mood that generally shapes a child’s emotional stability, ability to tolerate stress,” says psychologist Elena Anoprienko.