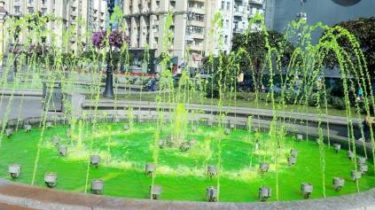 Kiev terrorize “wet” the vandals who painted the water in the fountains of the unknown dye green. The utility of this decided to stop the operation of the main fountain at the Independence square until next season, according to a story TSN.19:30.

In social networks users are actively discussing the unusual color of the fountains, someone jokes that this is the bath of Shrek, but the majority is outraged and demands to find and punish the vandals. Someone wrote that the bullies have a goal, they allegedly left a note demanding the closure of the zoo. Kommunalschiki say they are forced to wash all the fountains bare hands.

Fountains have earned again – all except the cascade, which is the decoration of independence. It will be dry until next season – until may 1, 2018. Says the Director of “Kawatha” Svetlana Kozlovskaya, so now will be every fountain, where you will paint, so if the vandals don’t calm down, Kiev risk to remain without water decorations. And although the equipment was not damaged, to restore every time the fountains expensive. “About 5 thousand hryvnias on the water,” she says.