Russia is actively helping the rebels “LDNR” to citizenship – Tymchuk 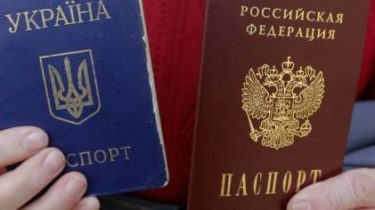 Migration Agency of Russia has stepped up the provision of assistance to the rebels “LDNR” to exit from the Donbass in Russia, where they plan to obtain citizenship and stay in a permanent place of residence.

It is reported by the coordinator of group “Information resistance” Dmitry Timchuk.

In particular, from 1 September for a fee similar services started to provide the Agency “Russian house”, which operates in the Russian Voronezh.

As the basic scheme of the acquisition of Ukrainian citizens Russian citizenship, intermediaries use the so-called program of “resettlement of compatriots”.

She supposes three stages: submission of documents to the Russian Embassy in Ukraine, the issuance of a temporary residence permit and citizenship (the stated term of 1 year).

Given the fact that this diplomatic facility is located in Kiev, the militants used for the first stage of one of the members of their families (the program has the status of a family and includes a visit to the Embassy by only one member of the family).

We will remind, in the higher and middle levels “of the administration of the head of DND” spreading rumors about change of control “DNR” in October of this year. It is noted that the rumors are based on the latest developments in the occupied Donetsk. “So, 05.09.2017 in Donetsk, a meeting was held with the participation of senior management “DNR” and representatives of the Russian Federation on the further development of the “DNR”. At the direction of the Russian side, participation in the meeting adopted a limited circle of leaders “DNR”, for example, the leader of the public movement “Donetsk Republic”. Pushilin was not allowed to him”, – stated in the message.