The Cabinet approved a draft budget for 2018 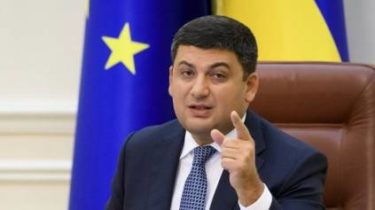 Prime Minister Vladimir Groysman has presented the state budget for 2018.

This was stated at a government meeting.

“Wages, pensions, jobs, increased investment, economic growth – this is a priority of this budget. It can be called a budget for growth and this growth we will demonstrate in 2018… We are overcoming the crisis, in many areas we have overcome it. What’s important is that the fact that the economy is growing, to transfer to the Ukrainian citizens”, – he said.

The consolidated budget’s revenues will grow by 15%.

Meanwhile, on defense and security will provide 164,9 billion.

On the road next year will direct 44 billion hryvnia.

In turn, the agricultural sector of the country, which now generates a fifth of GDP, will receive 7.3 billion hryvnia support. He noted the rapid growth of export of Ukrainian agricultural products in 2017.

Also Groisman has promised to increase the salaries of teachers by 25% next year and the allocation of 1 billion hryvnias for modernization of the elementary school.

The funding of culture will be 4.1 billion, on diplomacy will spend the MAWP of 4,435 USD.

“We properly prepare for winter, we have all the supplies, ranging from gas and ending all that is necessary, in order to enter planning in the new heating season to pass with dignity winter, to invest in the development of national economy, to approve the budget with the support of Ukrainian parliamentarians to reform … I am sure that to double this growth is possible when making necessary decisions,” he said.

“I have no problem to buy someone’s favor, we have a problem, and for me personally, that we may bring Ukraine to success. Therefore, the model is negligible populists absolutely responsible for policy development of the state. We can do it. This budget is proof that the government, President and Parliament together make the required decisions that serve the Ukrainian citizens”, – said before the adoption of the document Groisman.

We will remind, Groisman said that the draft budget on 15 September will be tabled in Parliament. During a conversation with the President of the EBRD Groisman also noted that the Ukrainian government has given priority to the reforms in the judicial, pension, medical industries, education, and management of state property. The Prime Minister said that next week the Parliament will consider draft laws on judicial reform and changes in the pension system. Also relevant to the consideration of the draft law on privatization, which was developed together with specialists from the EBRD.