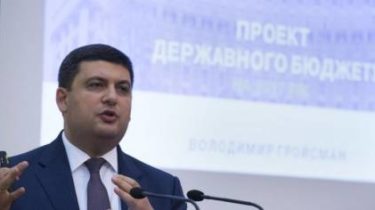 BP sarestoniemi the draft law “On state budget of Ukraine to 2018“, has been submitted by the Cabinet of Ministers of Ukraine.

This is stated on the website of the Parliament.

The project was registered under No. 7000, but the text is currently missing.

However, during a meeting of the government was announced the following figures for the project Budget:

The consolidated budget’s revenues will grow by 15%.

Meanwhile, on defense and security will provide 164,9 billion.

On the road next year will direct 44 billion hryvnia.

In turn, the agricultural sector of the country, which now generates a fifth of GDP, will receive 7.3 billion hryvnia support.

We are talking about the increase in teachers ‘ salaries by 25% next year and the allocation of 1 billion hryvnias for modernization of the elementary school.

The funding of culture will be 4.1 billion, on diplomacy will spend 4,435 billion.

We will remind, Groisman said that the draft budget on 15 September will be submitted to the Council. During a conversation with the President of the EBRD Groisman also noted that the Ukrainian government has given priority to the reforms in the judicial, pension, medical industries, education, and management of state property. The Prime Minister said that next week the Parliament will consider draft laws on judicial reform and changes in the pension system. Also relevant to the consideration of the draft law on privatization, which was developed together with specialists from the EBRD.