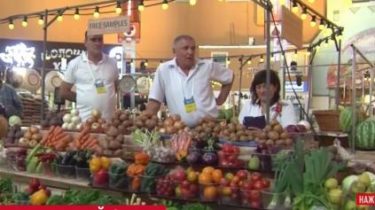 The 14th forum of the Yalta European strategy was launched in Kiev. For the third time summit, the Ukrainian capital after the annexation of Crimea by Russia, says the story TSN.19:30.

Party on the occasion of the opening of the event took place in the Bessarabian market. Sellers are left on their sites, a market not closed – just washed and cleaned, and also added stalls selling alcohol. All goods purchased by the organizers to save the coloring, and the property offers free tasting. The usual traders so revenue happy, however most people never learn, though all are welcome.

This forum is called “the summit of the former,” but a very influential former leaders. This year the expected performance of the former British Prime Minister David Cameron and former U.S. Secretary of state John Kerry and Condoleezza rice, former Secretary General of NATO Anders Fogh Rasmussen and the like.

Creativity party on Bessarabka have appreciated the former President of Poland Aleksander Kwasniewski. “I’m Ukraine for many, many years. And I don’t want to speak about Ukraine in terms of good – bad, positive – negative, optimistic – pessimistic. Here everything is difficult. I find here a lot of new facts, which give me some optimism, but pessimism, too much” – he admitted.