The Ukrainians in the final of America’s Got Talent and a fan of the bra at the football stadium. Positive news of the week 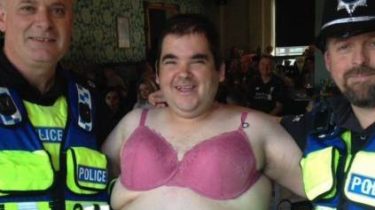 Over the past 7 days, users admired the talented Ukrainians and laughed at the IG Nobel prize.

IS THE APPLE WATCH FROM THE UKRAINIANS

Promotional video of the new generation of the Apple Watch, filmed at the Central train station in Kiev, created with participation of Ukrainian production Studio Radioaktive Film. The video was shown in the new theatre of Steve jobs to Apple during the presentation of new products from Apple. The footage was lit Central station of the Kiev metro station “Golden gate”. Now it became known that the creation of the video had a hand the Ukrainians.

Another flimsy accusations by Russian investigators in relation to the ex-Prime Minister of Ukraine Arseniy Yatsenyuk called on social networks a storm of jokes and comments. This time in the investigation of the so-called “Chechenskaya case” RF “identified” Yatsenyuk as the party fighting in Transnistria. In the case there was a photo of members of the UNA-UNSO in 1992, and in the framework of the “expertise” of one of them dubbed Yatsenyuk. And nothing that I cannot be considered a human face. Users are now called Ukrainian policies “a killing machine” and jokingly painted a scenario of bloody battles with his participation.

THE UKRAINIANS IN THE FINAL OF AMERICA’S GOT TALENT

Team Light Balance from Ukraine now takes part in the popular competition America’s Got Talent, where we were finalists. Spectacular group number opening the show made the judges rise from their seats. Light Balance is a team of dancers from the Dnieper. The founders of the project were Denis Baldin and Mykyta Sukhenko. Each performance Ukrainians and tells their individual story through neon show.

Harvard University was awarded the IG Nobel prize – an award for inventions of dubious scientific value. The ceremony was attended by scientists from around the world. For example, among physicists the award was given to a scientist who proved that cats are liquid. The prize in Economics went to researchers who insisted that the arms with crocodile reduce the attraction to gambling. In turn, of anatomy said the Briton, who found that after 30 years of a person’s ears are starting to grow on 2 mm every 10 years.

ROMANTIC DECLARATION OF LOVE WITH THE CINEMA

The Aussie threw his girlfriend a stunning confession. In the evening Mike was invited Back to the cinema to see the premiere of the film. In the hall lights went out, but instead of the usual advertising she saw on the screen of the elect. On the ocean with a small box in his hands he spoke of love. Puzzled, Beck didn’t understand what was happening until Mike, with the same box was not in front of her on one knee and asked for her hand.

The girl was so shocked, with trembling voice managed to say “Yes”.

Videoredo recognition to his girlfriend, the Aussie has already shot the video and showed at the cinema

In the Italian city of Pisa hosted an unusual concert. Famous Opera arias and sonatas in the concert hall by professional musicians performed under the close supervision of a white Android.

World-renowned tenor Andrea Bocelli it took iron self control to begin an Aria with the same conductor. “This evening – a revolution in robotics. It demonstrates how easily and intuitively a robot can learn new programs,” says General Director of the developer company Ulrich Spscies.

Video-music Android: in Pisa there was a concert conducted by the robot

A FOOTBALL FAN IN THE BRA AT THE STADIUM

A fan of English “Lincoln city” came into the match against “Stevenage” bra. A brave man named Simon hunter decided therefore to support women. The fact that the previous game, “Stevenage”, the stewards didn’t want to miss a lot of girls to the stadium and asked to see the bras.

Agency NASA has published a new photo of Mars taken with the Mars Reconnaissance Orbiter (MRO). The pictures appeared on the website space Agency.

The MRO examines the presence of water on the red planet. The Orbiter makes large-scale photographs of the Martian surface, analyze minerals, and is looking for underground water. Some photos look as if the planet does have water.