In Kiev, the transition on the Khreshchatyk there was a fire 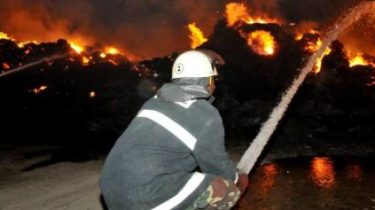 Small fire in the transition on the Khreshchatyk in Kiev extinguished.

This was reported by press Secretary of SSES in Kiev Svetlana Vodolaga, reports UKRINFORM.

In the underpass on Khreschatyk street opposite the hotel “Dnipro” under stairwells there was a fire of garbage. The fire quickly extinguished.

Videotrue children who were left home alone, started the fire in the apartment in the Kyiv region

We will remind, large-scale fire occurred on Khreschatyk street on June 20. The building, which erupted, located on the corner of Khreshchatyk and Bohdan Khmelnytsky, opposite the Central Department store. There are catering outlets and shops, and beside the Pechersk court. Rescuers extinguished the fire late in the evening. The fire burned construction materials, partitions and ceilings between the second and third floors and roof of the building. In addition, there is the threat of partial destruction of the building. While extinguishing a fire the dead and injured were not.