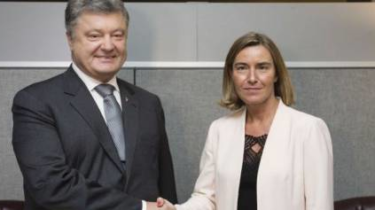 President of Ukraine Petro Poroshenko had a meeting with the high representative of the European Union for foreign Affairs and security policy Federica Mogherini.

The meeting was held on Tuesday, September 19, in the framework of the UN General Assembly, the press service of the Ukrainian President.

Poroshenko welcomed the new level of cooperation between Ukraine and the EU, in particular in the context of the entry into force of the Association Agreement and establishing visa-free regime. The parties also discussed a new strategic goal for the European integration of Ukraine.

Safety and transparence cooperation: what Poroshenko Duda spoke in the United States

Poroshenko urged Mogherini to support initiatives of the Ukrainian side regarding the further rapprochement with the EU and carrying out deep domestic reforms in Ukraine.

In addition, the parties discussed the situation in the Donbas and the initiative of Ukraine regarding the deployment of a peacekeeping mission in the area ATO.

The Ukrainian head of state also stressed that Ukraine hopes for more active support of the EU on the issue of release of Ukrainian political prisoners in Russia and Crimea.

In the US, Poroshenko offered the military Academy to find a partner in Ukraine